The Organization Structure of the IASC Foundation

From 1973 untill 2001 the body in charge was the International Accounting Standards Committee (IASC). IASC was created in 1973 between the professional accountancy bodies in 9 countries and from the year 1982 its membership comprised of all the accountancy bodies who were members of the International Federation of Accountants (IFAC). The principle significance of the IASC was to encourage national accounting standard setters around the world to improve and harmonize national accounting standards.
The members of the IASC who were Professional Accountancy Bodies of the world delegated the responsibility to the IASC Board. The IASC Board was responsible for all activities including standard setting activity. The Standards adopted by the IASC Board were known as the International Accounting Standards (IAS). 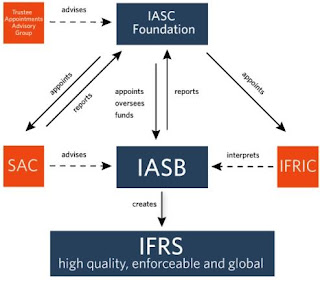 It receives funding in the form of donations from Organizations, Accounting firms, Central Banks and Capital Market Regulators amongst others. The funding of the IASC Foundation is based on four principles.
In its Annual Report of 2007, the Foundation received funds of approximately 11.28 Million Sterling Pounds. 26 Countries contributed. Of these, 174,358 Sterling Pounds was India’s contribution. Contributors from India include the RBI, ICICI, Infosys, Grasim Industries, Bharti Airtel, Tata Sons, Satyam Computers, L&T and RIL.

The monitoring board has the authority to participate in the process and the appointment of Trustees. It has the authority to overlook whether the trustees are discharging their duties in accordance with the constitution. The Trustees make an annual written report to the Monitoring Board.

India as is apparent is not represented on the Monitoring Board.

The Trustees of the IASC Foundation are responsible for its Governance including funding. The Trustees are publically accountable to the Monitoring Board of the capital market authorities.

The Trustees are initially appointed for a period of three years.

The trustees are, in addition to the governance of the foundation, responsible for the appointment of the members of the International Accounting Standards Board (IASB), the International Financial Reporting Interpretation Committee (IFRIC) and the Standards Advisory Council (SAC). They also have the power to terminate non performing members of the above board, committee and council.

The International Accounting Standards Board (IASB):

The IASB is responsible for all standard setting activities, including the development and adoption of IFRS. The IASB comprises of 14 members that is to be increased to 16 members. The members of the Board are a mix of practical experience in standards setting process, or as a user, or accounting, academia or from the preparer community. The Trustees appoint the members of the Board.

The constitution also makes it amply clear that the work of the IASB will not be invalidated by its failure at any time not to have representation in accordance with the geographical allocation laid down in the constitution. Members of the IASB are appointed for a term of up to 5 years, renewable once.
Mr. Prabhakar Kalavarcherla is a member of the ICAI so can be said to represent India.

At the time the IASC Foundation was constituted first, the IASB adopted all IAS issued by the erstwhile IASC. The existing IAS continues to be operative till the extent it has not been amended or withdrawn by the IASB. New standards issued by the IASB are called the IFRS. Collectively IFRS includes both IAS and IFRS.

IFRIC comprises of 14 members appointed by the Trustees for a renewable period of three years. No specific geographical allocations have been spelt out in the constitution.
Going by the profile of the existing members that comprise the IFRIC it is apparent that the committee does not have representations from India.

The constitution provides that the Trustees, as they deem necessary, appoint non voting observers representatives of the regulatory authorities who shall have the right to attend and speak at the meeting. Accordingly, IOSCO (International Organization of Securities Commission) and European Commission are presently the Observers.

The members of the SAC are appointed by the Trustees. The objective of the SAC is to advice the IASB on agenda decisions and priorities. The constitution provides that the council may comprise of 30 or more members. No geographical allocations have been specified. Members appointed on the council would represent a wide group of organizations and individuals who are affected by or with an interest in international financial reporting.

With so many organizations, institutions, individuals, countries that are participating in this exercise of creating an Organization that will eventually issue Reporting Standards that will be adopted globally, it remains to be seen how the various committees, councils, trustees steer away from the political pushes / compulsions to have a high quality standards drafted and issued. The IASC Foundation has a Conflict of Interest Policy in place but the same was not available on their website for download and for me to include it here. India has to increase its participation in the entire process to ensure that its interest is addressed appropriately.

The book is available in Mumbai at Sertling Book Depot in Fort.

Click here to get updates by Email in your inbox

Popular posts from this blog

April 22, 2007
Learning Curve Theory is concerned with the idea that when a new job, process or activity commences for the first time it is likely that the workforce involved will not achieve maximum efficiency immediately. Repetition of the task is likely to make the people more confident and knowledgeable and will eventually result in a more efficient and rapid operation. Eventually the learning process will stop after continually repeating the job. As a consequence the time to complete a task will initially decline and then stabilise once efficient working is achieved. The cumulative average time per unit is assumed to decrease by a constant percentage every time that output doubles. Cumulative average time refers to the average time per unit for all units produced so far, from and including the first one made. Major areas within management accounting where learning curve theory is likely to have consequences and suggest potential limitations of this theory. Areas of consequence: A Standard
1 comment
Read more

April 13, 2008
Poll : Does pursuing CIMA, UK qualification add value to a member of ICWAI, India ? Vote on the poll and share your thoughts by commenting the blog. Poll: Vote here I feel that if you are a member of ICWAI and you pursue CIMA, UK qualification, you are not adding any value to your skills since you will be learning the same. Once you are qualified, you are still a Cost & Management Accountant but from UK. For an employer, I would still have same skills and training on Management Accounting. However if you pursue qualification like Company Secretary or CPA or ACCA , your skills are enhanced with the knowledge gained during training and passing of exams. After qualification, you are bound to follow the CPD programs of ICWAI and other institute. In competitive world, employer look for people with multiple skills. Which one promotes you as professional better against your name: AICWA, ACMA or AICWA, ACS or AICWA, CPA or AICWA, ACCA Amazon.co.uk Widgets Regards, Santosh
8 comments
Read more

Resistence to Change - Approaches of Kotter and Schlesinger

April 26, 2008
The Six (6) Change Approaches of Kotter and Schlesinger is a model to prevent, decrease or minimize resistance to change in organizations. According to Kotter and Schlesinger (1979), there are four reasons that certain people are resisting change : Parochial self-interest (some people are concerned with the implication of the change for themselves ad how it may effect their own interests, rather than considering the effects for the success of the business) Misunderstanding (communication problems; inadequate information) Low tolerance to change (certain people are very keen on security and stability in their work) Different assessments of the situation (some employees may disagree on the reasons for the change and on the advantages and disadvantages of the change process) Kotter and Schlesinger set out the following six (6) change approaches to deal with this resistance to cha
1 comment
Read more